As we approach the end of the first third of the NBA season, paradoxically, the picture seems to have become more nebulous. Questions concerning the legitimacy of the Kings and Mavericks, the sustainability of the Clippers, the potency of the Raptors, and a multitude of others involving the likes of Jimmy Butler, Brad Stevens, and the bottom-half of the Eastern Conference. However, amidst the confusion, one thing has made itself glaringly apparent: the pace of play is blazing, and it looks to stay that way.

In this first month and a half of the NBA’s new year, the average pace is 3.38 possessions greater than the modern NBA has ever seen (since 1990), equivalent to a 3.4% increase from the previous high. Of the thirty teams, only two have seen a regression in their own pace of play, evidencing that this witnessed revolution is a holistic overhaul. To determine which teams this revolution benefits, let’s first dissect the effect increased pace has on basketball.

To state the obvious, higher pace requires higher stamina. With approximately 3.38 added possessions per game comes about 500 extra feet traveled per starters every game. While this quantity seems minute when observed on an individual game basis, when sustained over an 82-game season, this only tacks on an additional 8 miles to an already grueling schedule.

Though the NBA has made it a focus of their scheduling agenda this season to limit back-to-backs and neutralize its bearing to some extent, fatigue and relative enervation are still very much prevalent. Thus, this provides an advantage to the teams who have already adapted to a heightened pace of play, those who can maintain a pace whilst avoiding significant roster alteration.

However, this brings up the question as to how the effect of fatigue can be measured. While the obvious indicator might seem to be difference in fourth-quarter/late-game play, this opens the door to a slew of outside factors, as fatigue cannot be isolated from this data alone (it is impossible to account for coaching prowess, late-game luck, and the degree to which “clutchness” exists).

Thus, the best way to evaluate fatigue is from a holistic perspective, and with observable, definite trends, the effect of fatigue can be noted and the noise from the aforementioned additional factors is attenuated.

Though the predicted relation is not yet apparent, this can be likely attributed to the fact that the season is still young and players have not yet fatigued in a significant fashion. For reference, here are the same factors plotted from the 2016-17 season to the 2017-18 season.

Evidently, in this graph the correlation (m=-2.867) is much stronger in the opposite direction than the previous. This suffices that typically, teams seeing an increase in pace are due, over the course of a season, to see a decrease in winning percentage. Antithetically, teams seeing a decrease in pace project to see an increase in winning percentage, thus indicating that teams who show relative consistency/decline in pace place themselves in a better position to succeed.

The second influence an increase of pace has on NBA game play is an increase in transition. This season, the average transition frequency has gone up 1.2% from the previous (modern) high.

Usually with an increase in volume this stark, efficiency declines, but that has not been the case through this season. in fact, effective field goal percentage (eFG%) of teams in transition this season is up 0.63% from last season, and the current mark (59.653%) is 7.653 percentage points higher than this year’s eFG% average. This means that on transition this season, teams have an average offensive rating of 119.31, and are scoring an average of 9.54 transition points per 100 possessions, up 0.77 points from last year’s mark.

The final basic influence an increase of pace has on the outcome of this season is teams playing at a higher pace should have their outcome influenced marginally less by luck. Theoretically, the greater the sample size (more shots), the less susceptible an outcome is to anomalous occurrences (i.e. bad teams outperforming expectation). However, the numbers thus far seem to have played out differently than the on-paper prediction.

To first look at last season’s numbers, consult the chart above. The yellow box, with parameters at -0.05 and 0.05 (total range of 0.1), houses within it 80% of total teams in the NBA. Evidently, teams from all pace tiers experienced results relatively unimpeded by significant amounts of luck.

Though a slope of -0.002 is fairly significant when dealing with a range in the hundredths place, this trend line shows that teams with a higher pace seem to have greater luck than teams on the lower end of the spectrum. This difference, if not anomalous, can likely be attributed to the aforementioned impediment that is fatigue.

Logically, in end of game situations, teams that are conditioned to play at a high pace will be less inhibited by fatigue than their slower opponent, regardless of that specific game’s pace. Thus, having their pure winning percentage inflated by the provided crunch-time advantage (will release in-depth piece soon), teams with a higher pace will generally outperform regular season Pythagorean Expectation. 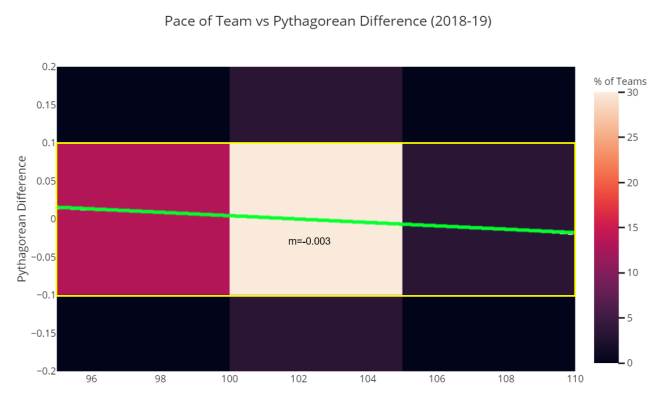 This noted trend is substantiated with the above numbers thus far this season. Looking at this chart from this past season, we can see that as the pace discrepancy increases (ranged from 95.59 to 101.6 last season; 96.56 to 107.12 this season), teams on the higher end of the scale are afforded an advantage as it regards luck. In this particular chart, we can see the same yellow box, this time enclosing 87% of all teams within.

However, noticeably different between the two charts is the height of the boxes. The first aggregated box had a range of 0.1 (-0.05 to 0.05), whereas the above aggregated box has a range of 0.2, spanning from differences of -0.1 to differences of 0.1. The same rationale used to explain the negative-trending fitted line can be applied as rationalization as to why teams are seeing more drastic Pythagorean Differences.

This concludes the first segment of the investigative trilogy: Who Stands to Benefit from the NBA’s Pace Revolution. The next segment will delve deeper into each factor elicited above, and the third segment will determine and predict which teams stand to gain/lose in the long-run.

View all posts by Paul Ibrahim